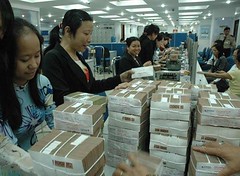 Last week several banks cut their lending interest rates on the recommendation of the State Bank of Vietnam.

State giant Vietcombank set its rates for medium- and long-term loans at 10 percent a year, down from 10.5 percent. The bank also earmarked 300 billion VND (13.4 million USD) to lend to companies for expansion. Vietcombank said this package was made possible by its cut in operational costs, strong risk management, and maximised efficiency.

BIDV, another large State-owned lender, has also reduced its short-term rates by 0.5 percent for selected borrowers.

Medium- and long-term loans for manufacturing and business can now be obtained at less than 10 percent interest, down from the previous 10-11 percent.

Vietinbank, Agribank, Saigon-Hanoi Bank and many others have since followed suit.

The banks’ rate cut decision came after prime minister Nguyen Xuan Phuc met with 300 business executives in HCM City on April 29. At the meeting he urged the central bank to maintain reasonable interest rates on loans for manufacturing and business, keep foreign exchange rates under control, and provide all assistance to the business community.

However, many other banks, particularly small ones, have said it is very difficult for them to lower the lending interest rates at this time and asked for support from the government and shareholders.

Though the government has been keen to bring interest rates down since early 2015, they stood stubbornly high, even showing an upward tendency recently.

Analysts blamed this on many reasons including increasing dollarisation, rising public debts and banks’ bad debts.

Over the last year, despite the low inflation rate that during many months remained under 1 percent, banks kept hiking deposit interest rates, which have now reached rather high levels.

Some banks now offer 8 percent for deposits of over one year.

There is increasing dollarisation because of the economy’s recovery and devaluation of the dong.

The SBV decided to weaken the currency by 3 percent in response to China’s depreciation of its yuan by 5 percent last August. This made people reluctant to keep the dong and shift instead to US dollars.

With regard to public debt, some analysts said the government recently issued more bonds mainly to serve rollover of debts because many short-term debts had fallen due.

Consequently, the government had to compete with businesses to get loans from banks, thus putting upward pressure on interest rates.

But bad debts are believed to be the main reason for making interest rates at least 2 percent higher than the average inflation rate of the last few years.

VietinBank’s bad debt ratio as of March 31 was 0.96 percent, or equivalent to 5.3 trillion VND, more than half deemed irrecoverable.

For Vietcombank, the figure was 1.84 percent, equivalent to 7.6 trillion VND.

But these are official figures, and speculation has been rife for long that the actual figure could be in double digits.

Some analysts expect the interest rates to dip by a further 0.5 percent this year since the dollarisation could decrease thanks to the central bank’s new mechanism to manage foreign exchange rates more flexibly.

The policy is expected to increase risks while reducing rewards at the same time for those keeping dollars.

The dong is unlikely to see any major devaluation also since the possibility of the US central bank increasing rates is low as the inflation rate is still much below the 2 percent target.

The central bank’s determination to limit loans to the property sector is likely to help reduce bad debts and constrain credit growth, easing the pressure on lending interest rates.

Some analysts said to bring down the interest rates the central bank should not rely solely on banks’ efforts since the latter face many difficulties themselves.

Instead, it needs to instil market discipline by severely punishing all violations of interest rate regulations, they said.

The national lender should also seek ways to regularly reduce the benchmark interest rates, which has been kept unchanged since 2014.