handle prolonged loss-making projects in line with market mechanisms while reaffirming that the State would not pump money into inefficient projects.

The remarks were made during a meeting between the Ministry of Industry and Trade (MoIT) and relevant State-owned enterprises on Wednesday.

Twelve big-ticket projects under the Ministry of Industry and Trade have recorded total cumulative losses of over VND16 trillion (US$710.4 million) as of the end of 2016. These projects has total investments of over VND63.6 trillion, or roughly $2.8 billion at the current forex rate, with loans accounting for about 75 per cent of this sum.

In late June, the Poliburo issued conclusion and catalogued measures to deal with these unprofitable projects. 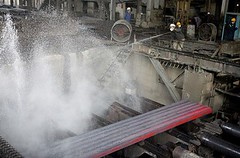 Deputy PM Hue emphasized two objectives when carrying out measures to tackle these projects under the Politburo, of which taking prompt action to deal with the problems faced by these projects while minimising State-owned asset losses; and clarifying the responsibilities of and strictly handling the organisations and individuals connected to these losses.

The measures include selling projects to foreign investors and accepting bankruptcy for heavy loss-making projects.

Under the Politburo’s direction, the responsible ministries must submit the solutions to the competent authorities for approval by the end of this year and put forward action next year. Under the plan, these projects will likely be solved completely by 2020.

The deputy PM’s view is to “resolutely handle loss-making projects in accordance with market mechanisms while respecting the principle of self-control and self-responsibility of enterprises”.

Hue also reaffirmed the government’s standpoint that the State will not provide more capital for inefficient projects.

He highly appreciated efforts made by the Vietnam Steel Corporation and Vietnam National Chemical Group in taking measures to restructure the units under their authority.

Meanwhile, three ethanol plants have been still shut down and PetroVietnam is building divestment plans for two ethanol plants in Phu Tho and Binh Phuoc. PVTex Dinh Vu Yarn Plant has been ordered to pay VND73 billion to Dinh Vu Industrial Park for electricity, water and infrastructure costs which has resulted in difficulties in restarting the factory or transferring it to other investors.

On a positive note, Lao Cai Cast-Iron Steel Plant has agreed to continue adding capital to invest in the steel rolling line with a capacity of 500,000 tonnes per year. Since March 2017, the factory has started to earn a profit which is projected at VND67 billion in the first half of this year.