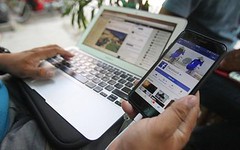 Small and home-based business owners who use the Facebook platform to sell products and have revenue of more than VND100 million (US$4,500) per year will be taxed at five per cent.

The money will be paid through a tax registration, value added tax, personal income tax and other taxes depending on the goods they sell.

“With revenue of over $4,500 each year, a business on Facebook paying nearly VND2 million ($90) for tax is acceptable,” Nguyen Thai Son, a taxation consultant, said in the Thanh Nien (Young People) newspaper.

The tax level for those who have the same revenue in a traditional business is around four times higher, nearly VND8 million ($360), he said.

In early June, the HCM City and Hanoii Taxation Departments sent 13,400 notifications to Facebook businesses and over 1,000 businesses contacted with tax officials in HCM City.

“To reduce tax losses from online business, tax authorities have woked with Facebook, Google and Apple Store to have e-commerce accounts, worked with banks regarding revenue and worked with police to have a list of those who haven’t paid tax,” Le Th? Thu Huong, deputy head of the HCM City Taxation Department said.

“The taxation department will collect information from different sources and publish names of organisations and individuals who evade taxes, as well as request relevant authorities to close any e-commerce websites if they do not pay tax,” she added.

Huong also said that individuals who have online business in social media will be provided a taxation registration and code.

In developed countries, all people and organisations are required to declare income and pay taxes.

Bui Quang Tin, a lecturer in business administration at HCM City University of Banking, said that transactions on the Internet are difficult to control and collecting taxes should be done step by step. Initially, there should be requirements that all individuals conducting business via Facebook must register their operations and declare their income.

He also noted that with millions of Facebook accounts, in the first phase, the tax authority should target large and professional businesses, because many individual dealers operate as side jobs, or even seasonal businesses. If it tried to control all of them, it would use significant resources and probably be inefficient. The difficulty in managing online sellers and collecting taxes is said to be the consequence of the low rate of non-cash transactions in Vietnam.

According to an official estimation, e-commerce activity has been booming, with 80,000 active websites in the city, half of which run stable operations, but tax collection in the field was very poor, especially sales activities through Facebook.

In fact, in 2015, revenue from e-commerce in Vietnam reached $4.1 billion, an increase of five times compared with 2012. It is expected to reach $10 billion by 2020, accounting for 5 per cent of total retail sales in the country. Therefore, e-commerce will play a significant role in the Vietnamese retail sector in the future.