The Ministry of Finance (MOF) recently released a number of draft circulars, proposing rebate of many charges and fees payable by  businesses and sent them to ministries, ministerial-agencies, Vietnam Chamber of Commerce and Industry, Vietnam Association of Seafood Exporters and Producers, and provincial-level People’s Committees for opinions. 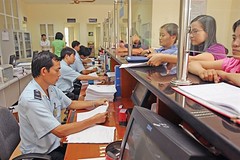 In a draft circular, designed to replace Circular 286/2016/TT-BTC dated November 14, 2016, MOF proposed reducing the appraisal charge for grant of export food certificates for foods subject to inspection and taking of specimens at food enterprises at the request of importers, from current VND 350,000 per shipment to VND 200,000.At the same time, charges for certification of food safety knowledge of persons engaged in the agro-forestry-fishery sector would be reduced to VND 30,000 per person per time.Regarding the draft revising Circular 279/2016/TT-BTC dated November 14, 2016, charges for appraisal of conditions of testing establishments, regulation conformity certification organizations and agencies in charge of state inspection of imported foods would also be reduced.Specifically, charges for initial appraisal would be reduced from VND 32 million to VND 28.5 million per time per unit. Meanwhile, those subject to re-appraisal would have to pay VND 20.5 million instead of current VND 22 million.In addition, the charge for appraisal of contents of film scripts, programs recorded on tapes, disks, software and other materials and documents for advertising of foods, food additives and processing aids was proposed to be cut to VND 1.1 million from VND 1.2 million.The MOF also planned to remove fees for grant of quarantine certificates for animals, terrestrial animal products, imported or transited seafood, temporarily imported products for re-export, or goods transferred through border gates specified in Circular 285/2016/TT-BTC.In a draft circular amending Circular 225 from 2016, the level of charges for grant of a bio-safety certificate for genetically modified products to be used as foods and animal feeds would be cut from VND 120 million to VND 105 million.Under the draft amendment to Circular 277, dated November 14, 2016, charges for appraisal and certification of information contents of pharmaceutical and cosmetics advertisements would be VND 1.6 million per application, instead of current VND 1.8 million. The MOF also suggested cutting the appraisal charge for grant of an import permit for pharmaceutical materials or traditional medicaments from VND 200,000 to VND 150,000