VCN-  Tomorrow (November 25), Decree 113/2017/ND-CP of the Government detailing and guiding the implementation of a number of articles of the Law on Chemicals takes effect. The General Department of Customs has sent a letter to the Ministry of Industry and Trade saying many problems will arise when this Decree comes to life. 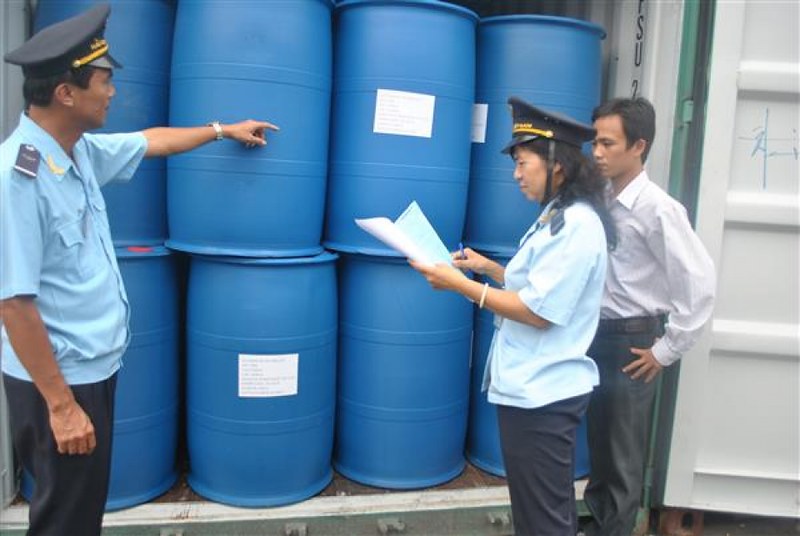 Article 13 creates inadequacies in the management of pre-substances

Among them, the biggest bottlenecks are regulations related to precursors. According to the provisions in Clause 1, Article 13 of Decree No. 113/2017 / ND-CP, exemption permits for import and export of pre-substances include: a / Goods containing group 1 industrial pre-substances with less than 1% quantity; b, Goods containing an industrial group 2 precursors are less than 5% by weight.

The General Department of Customs said that the above regulations lead to many problems.

Legally, the concept of precursors is clearly defined in Clause 4, Article 2 of the Law on Drug Prevention and Control. The list of pre-substances stipulated in the decrees: Decree No. 82/2013/ND-CP and industrial pre-substances are specified in Circular No. 42/2013/TT-BCT. According to the above documents, an industrial precursor has 6 criteria: Name of substance, scientific name, CAS code, chemical formula and HS code. Such regulations are clear, transparent, easy to implement for the management object and the manager.

The concept of goods containing precursors is not identified in the relevant regulatory documents. In fact, there are many items that contain precursors, for example Sulfuric acid in lead batteries. Amino-benzoic acid is commonly found in sunscreen products. Safrol or safrole has been widely used as a food additive in root beer, cauliflower, and many other common commodities. Phenylacetic acid is an auxin (a plant hormone) and is found mainly in fruits, phenylacetic acid is used in some perfumes because it smells of honey. Acetone is used in detergents, cleaning tools, for the preparation of two-component epoxy resins, paints and varnishes. Tartaric acid is found in many plants, especially grapes, bananas, and wine, which are added to other foods.

According to the General Department of Customs, the goods containing the above-mentioned substances are not on the list managed by the license according to Article 4 of Decree No. 08/2015/ND-CP, therefore only need to make procedure at the border gate as normal.

According to Article 16 of Decree No. 08/2015/ND-CP, goods are classified into one single code as the basis for tax calculation and implementation of commodity management policy.

Compliance with Article 13 of Decree 113/2017/ND-CP will result in a variety of goods with tax identification numbers and codes applying different management policies, for example: paint with code 3207, the management license for Acetone (the constituent in the paint) subheading 2914.

Accordingly, the General Department of Customs considers that Article 12 of Decree No. 113/2017/ND-CP only regulates dossiers and procedures for applying for import and export of pre-substances (not containing pre-substances) is licensed by the Ministry of Industry and Trade, but according to the analysis, many goods containing precursors are not subject to the Ministry of Industry and Trade.

In fact, since there is no inventory for pre-owned merchandise and most of the merchandise contains sensible pre-substances that are not perceptible by the senses or manual methods alone, this leads to the requirement for analysis, inspection is troublesome, costly for businesses. For example, to determine the amount of sulfuric acid contained in lead batteries or the amount of acetic acid present in salted cucumbers have to be inspected.

Prior to the anticipated impacts of Decree 113/2017/ND-CP, the General Department of Customs would like to request the Ministry of Industry and Trade to issue a guideline in the direction of: the chemical mixture contain pre-substance with the HS code of the precursor named substance, scientific name, CAS code, chemical formula as described in the list, the import license must be as pre-substance.

Pre-substance merchandise generally does not require a license to import or export pre-substances.

Many regulations are making Customs difficulties

Apart from problems related to pre-substances, the General Department of Customs also requests the Ministry of Industry and Trade to clarify many difficulties stated in Article 2, Article 3 on the application subjects: In case enterprises import chemicals specified in Appendix I, Appendix II Directly used, manufactured, not provided on the market for profit purposes are subject to the application of the decree or not?

Obstacles to Article 25 do not prescribe how much the limit of chemical content to be declared in the mixture is necessary to declare the chemical is very difficult for both the customs inspection and customs declarants when implementing etc.

For the time to accept the imported chemical clearance and kinds of handling violations, according to the Decree No. 113/2017/ND-CP, the confirmation by the Department of Chemicals “automatically feedback information to the National Information Portal” but do not specify the time limit for returning confirmation results, customs offices and enterprises have no basis for monitoring customs procedures. In addition, the Decree contains unclear information on chemicals, the importing organizations and individuals will handle the violations, but it is unclear what processing regulations are currently stipulated in the documents.

For the implementation validity, Article 38 of the Decree does not replace the Decree No. 58/2003/ND-CP regulating import, export, and transit of narcotics, pre-substances and addictive drug, psychotropic medicines through Vietnam territory and Decree No. 82/2013/ND-CP issued by the Government promulgating lists of narcotic substances and pre-substances. Therefore, the General Department of Customs requests the Ministry of Industry and Trade to provide guidance on the import and export of pre-substances from November 25th, 2017 in accordance with Decree No. 113/2017/ND-CP or continue to comply with the regulations at Decree No. 58/2003/ND-CP and Decree No. 82/2013/ND-CP, Circular 42/2013/TT-BCT.