The Vietnam Association of Seafood Exporters and Producers (VASEP) has requested the State Bank of Vietnam (SBV) to revise the current regulations to let them access short-term foreign-currency loans. 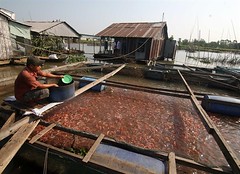 According to the SBV’s Circular on credit institutions and foreign bank branches providing foreign-currency loans to residents, short-term loans to fund the export of goods were not allowed, in an effort to stem the dollarization.

Tightened access to foreign currencies which forces local producers to borrow in Vietnam dong with higher interest rates was undermining their competitiveness, the association said, adding that the gap in competitive advantages between local and foreign-invested enterprises could widen.VASEP said if Vietnamese firms must borrow in Vietnam dong for short-term capital, the differences in interest rates on Vietnam-dong and foreign–currency loans would push up prices of Vietnamese exports in general and seafood products in particular.In addition, many seafood companies, especially small- and medium-sized enterprises, are struggling to seek capital for 2016 after a year of declining export revenue.The devaluation of several foreign currencies has also put Vietnamese exports in a difficult situation.With a stable foreign exchange trend seen in the first quarter of this year, the association said that allowing short-term foreign-currency loans in 2016 would not cause a negative impact from significant foreign exchange fluctuations.