VCN – Mr. Au Anh Tuan, Acting Director Acting Director General of Customs Control and Supervision Department (General Department of Vietnam Customs (GDVC) said that the GDVC has invested in equipment systems to inspect and supervise imported and exported goods at ports. Thus, the inspection is done not only by manual but also by modern equipment. 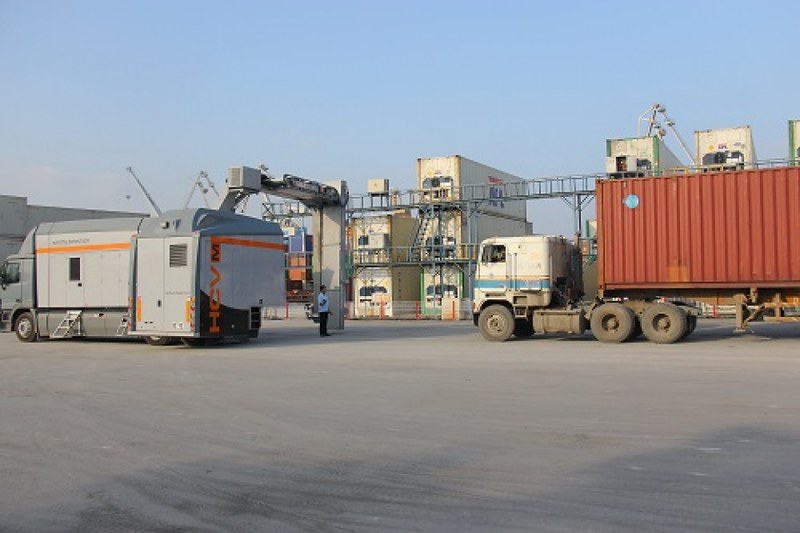 At the 4th session of the XIV National Assembly on 1 October 2017, the deputy Ha Thi Minh Tam (Ha Nam province) said: Customs inspection of imports and exports at ports had been completely implemented by manual but not by machine. The management of temporarily imported goods for re-export, particularly, loose management of temporary import for re-export of foodstuff caused the imported food spreading over the market.

Talking to a Customs Newspaper’s reporter on this issue, Mr. Au Anh Tuan said that according to data of the GDVC, shipments subject to physical inspection in Customs clearance only accounted for 5.08% of the total Customs declaration.

The Customs Law and the by-law documents provide that the physical inspection of goods is carried out by Customs officers directly or by machinery, technical equipment, and other professional measures.

Over the past time, the General Department of Customs has invested in the inspection and supervision system at ports such as container scanners, consignment scanners, electronic scales and equipment for goods inspection for Customs officers to carry out the inspection by machinery.

The temporarily imported goods for re-export shall be kept in Vietnam for no more than 60 (sixty) days from the date of completion of the Customs procedures for temporarily imported goods for re-export. In order extend the time limit, the enterprise shall send a written request for an extension to the Customs Branch where the temporary import procedures were carried out at; Each extension shall not exceed 30 (thirty) days and no more than two extensions per shipment.

Regarding the Customs management of temporarily imported goods for re-export, Mr. Au Anh Tuan said that the channel classification for Customs inspection is based on the principle of risk management prescribed in the Customs Law. For enterprises with high-risk items, the classification rate into the red channel was high and they are classified into subjects of Customs inspection. For temporary import for re-export enterprises, the current rate of channel classification on the system was 4.53% Green channel, 89.34% Yellow channel, 6.13% Red channel.

Business goods of TNTX, TNTX goods sent to bonded warehouses subject to the strict management and supervision of the customs office from the time of temporary import to the point of re-export from the Vietnamese territory, including in the process of keeping, To transport customs bonded warehouse by appropriate customs supervision methods such as customs seals control, direct supervision of customs officers, use of technical equipment and facilities.

Temporarily imported goods for re-export (including goods which completed procedures for temporary import or re-export or are waiting for actual export) shall be kept at one of the following places: Border gate, bonded warehouse, ICD and CFSs but not stored outside place without Customs supervision.

For goods in temporary import for re-export with conditional business (frozen food), the time limit of storing these goods in Vietnam exceeds the expiry date; enterprises shall only be allowed to re-export through the temporary import border gate within 15 days after the expiry date. If these goods are not re-exported, they will be confiscated and handled according to regulations. If these goods are appointed to be destroyed, enterprises must pay the destruction expenses.

Frozen foodstuff are not allowed to change the form of temporary import for re-export into import for domestic consumption.

Temporarily imported goods for re-export are not allowed to be separated containerized goods during the process of transporting goods from the temporary import border gate to the Customs supervision area, the re-export place is at the border gate and the Customs clearance point as prescribed. If the transportation requires to change or separate containerized goods for re-export, the traders must send a written request to the Customs officer and meet conditions of storage and means of transport, which must ensure Customs sealing condition. The moving of goods to another container or other means of transport must be under the Customs supervision