In 2015, the State Bank of Vietnam (SBV) decided to compulsorily acquire the entire shares of GPBank, OceanBank and VNCB at zero dong. After the acquisition, SBV transformed their operation models into 100 percent state-owned limited liability banks and appointed personnel from Vietcombank and Vietinbank to support, renaming VNCB into CBBank, and changing the brand identification of GPBank. 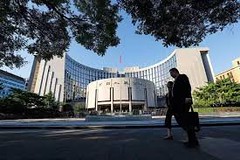 At the time of being compulsorily acquired by SBV, all these three banks faced extremely difficult situation with the accumulated loss of tens of trillion dong and negative equity.

For example, at the time of being acquired, VNCB had an accumulated loss amounting to 27 trillion dong and negative equity of 24 trillion dong. The real value of VNCB shares was negative 80,000 dong per share.

OceanBank also had the bad debt amounting to more than 15 trillion dong, accounting for 49.84 percent of the total outstanding loan; the accumulated loss of nearly 10.2 trillion dong and nearly doubled negative equity.

As per SBV’s report, after having 100 percent capital acquired and getting people to support, this group of “zero dong” banks have stabilised again.

The reality shows that almost all doors of these bank’s transaction offices and branches have advertising banners emphasising that they are “100 percent state-owned banks”.

Referring to the website of a bank being compulsorily acquired by SBV at zero dong, all positions introducing capital mobilisation and lending programmes noted that they are “100 percent state-owned banks”.

Many customers comment that the state’s acquisition of zero dong banks help them feel more assured when trading here.

“When OceanBank was an ailing bank, I was very worried that it would affect my deposits here. Currently, this bank has become a fully state-owned bank, so I feel more assured that the state is responsible for them. Transactions still take place as normal without being affected”, said Huy Thanh (Ha Nam province).

Meanwhile, many customers said since these banks were acquired by the state, they dared to continue using the services.

Ha My (Cau Giay district, Hanoi) said since the State acquired GPBank, she had the courage to deposit into this bank.

“Previously, I used to withdraw my deposits from this bank but after SBV’s acquisition, I feel more assured to deposit because of being guaranteed by the State. The bank’s service after being acquired is also better. Previously, it was very difficult to withdraw a large amount of money and now, most transactions are very well responded”, said My.

As per the latest business results about the operation of the three zero dong banks, as of the end of June 2016, Ocean Bank’s personal deposit mobilisation increased nearly 30 percent, loans to personal customers grew 24 percent from the end of 2015.

Also as per the latest data from GPBank, as of the end of June 2016, the bank’s deposit balance increased 8.7 percent from July 6, 2015. Meanwhile, CBBank reached the deposit balance of approximately 29.552 trillion dong and the net increase in capital mobilisation in the first half of 2016 touched 2.497 trillion dong. This bank also sold 500 billion dong bad debt to VAMC and continued to sell more.