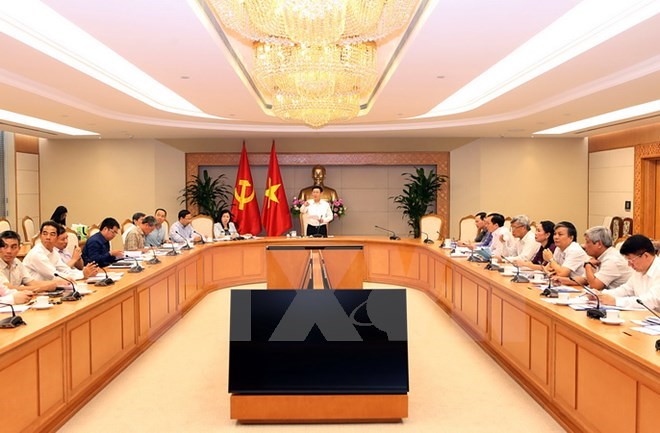 As many as 180,079 documents of 12,683 businesses were processed through the national one-stop-shop (OSS) mechanism by the end of June 2017, representing year-on-year rises of 107 percent and 70 percent, respectively.

The figures were revealed by the general Department of Vietnam Customs during the second meeting of the National Steering Committee for National and Asean One-Stop-Shop (OSS) Mechanisms and Trade Facilitation (Steering Committee 1899) in Hanoi on July 11, which was chaired by deputy prime minister Vuong Dinh Hue.

[National one-stop shop mechanism to be applied across ministries]

According to the general Department of Vietnam Customs, in the first six months of 2017, the Vietnam Chamber of Commerce and Industry was connected to the OSS mechanism, raising the total number of agencies joining the system to 11.

Meanwhile, three more administrative procedures were added to the system, bringing the total figure to 39. The department is launching OSS mechanism in aviation, and a project to supervise import-export activities through the national OSS mechanism in Hai Phong and Hanoi, before expanding to localities accommodating major seaports and airports.

Vietnam is ready to officially connect to the Asean OSS Mechanism as soon as the protocol on legal framework for the system becomes effective. Currently, nine Asean member countries, excluding the Philippines, have approved the protocol.

However, director of the general Department of Vietnam Customs Nguyen Van Can said that coordination in building legal documents among ministries remained weak, affecting businesses and agencies implementing online customs procedures through the OSS mechanism at nine international seaports.

He pointed to the sluggish amendment to legal documents in managing and supervising exports and imports, along with agencies’ failure to recognise each other’s inspection results.

Pointing out that 50 percent of the total inspection procedures of nine ministries do not have specific standards, the deputy PM said that the application of different standards has caused difficulties to businesses.

He asked relevant ministries, especially the Ministries of Industry and Trade, Agriculture and Rural Development, and Health, to promptly review and revise overlapping regulations on customs inspection, lowering the ratio of inspection to 15 percent by 2020.

Deputy PM Hue urged ministries and sectors to make greater efforts to fulfill the plan to add 130 procedures to the national OSS mechanism in 2017.

The deputy PM also requested ministries and sectors to complete their specific action plans to carry out the Asean OSS mechanism by August this year.